The Domaine de Ligoure, located in Vigen, is made up of a castle and its surrounding parkland, agricultural land and 40 hectares of woodland and seven estates, one of which is referred to as Grand Ligoure, the second de la Porte, the third de la Boufferie, the fourth as Bas-Ligoure and the remaining three as Pazat.

The Domaine extends over 291 hectares in total.

THE SURROUNDINGS OF THE OLD CASTLE

Its history is entwined with the story of a family and starts in 1856 when Frédéric Le Play bought the castle.
Albert Le Play (Frédéric’s son) wrote in “Souvenirs” (unpublished):”The castle was in ruins and the farm buildings were in a state of collapse, but we enjoyed breath-taking views and proximity to the beautiful towers of Chalusset”.

According to Béatrice Thomas-Mouzon, “The reserve and the estates are each made up of houses for the settlers, farm buildings, courtyards, arable land, gardens, enclosures, hemp fields, fields, meadows, pastures, chestnut groves, sapling tree plantations, woodland, coppices, plantations and other such legacies”.

The Château de Ligoure was derelict when it was purchased in 1856 and restoration works were initially envisaged before it was finally decided in 1868 that a new castle should be built. The old castle was demolished in 1870.

Nothing remains of the original castle except for a round corner tower and a small adjoining building, which makes it possible to date the original construction to the end of the 16th century or beginning of the 17th century. This small building was used as an agricultural chemistry laboratory by Albert Le Play.

Ligoure had a “wonderful chestnut grove where cep mushrooms grow and an avenue of ancient oaks”. Frédéric Le Play was very interested in this avenue and in a letter to his son in 1865 he wrote “it must be cared for in the same way that we would care for the irises in our eyes”. These oak trees have been protected throughout the various development works that have taken place over the years and some of them are still standing today, alternately planted with beech trees.

It is likely that Frédéric Le Play called on the services of landscape gardener Choulot for the landscaping of the Ligoure parkland between 1858 and 1863. However, in the absence of any landscaping plan or map, this is just a theory. Choulot died in 1864 and works for extending the parkland started in 1865.

EXTENDING THE WOODED AREAS OF PARKLAND

According to Albert Le Play’s "Souvenirs", the park was planted shortly after the castle was rebuilt between 1882 and 1894. However, it appears that the park’s history started in 1856 when Frédéric Le Play acquired the castle and its grounds and continued to evolve over 3 generations.

We can assume that a great deal of planting took place around 1865. From 1926 until 1935 Pierre Le Play (Frédéric’s grandson) had about 200 species and sub-species planted, all of which were carefully selected by him from French, and even English, tree nurseries.

The landscaped gardens were further embellished with a remarkable botanical collection up until 1930 and today walkers can enjoy a view of over 200 varieties of conifer.

The park also boasts some rare species of tree, ensuring that it benefits from particular botanical attention. 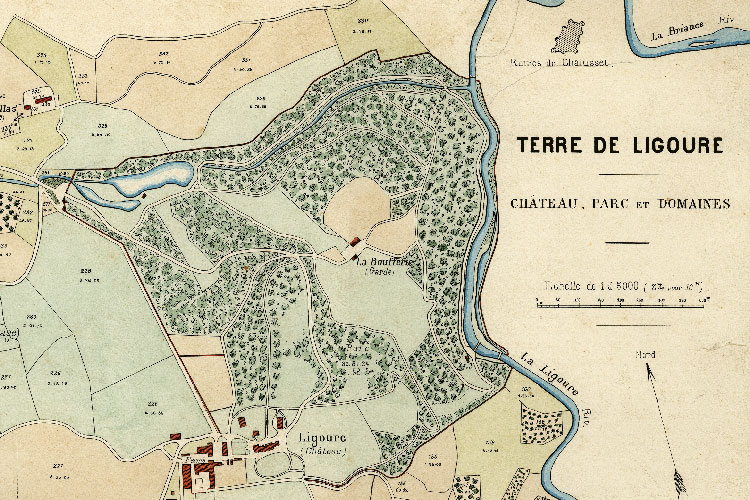 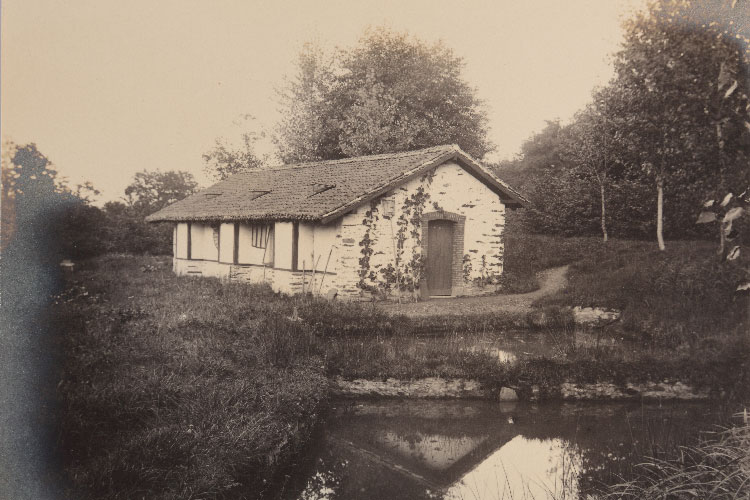 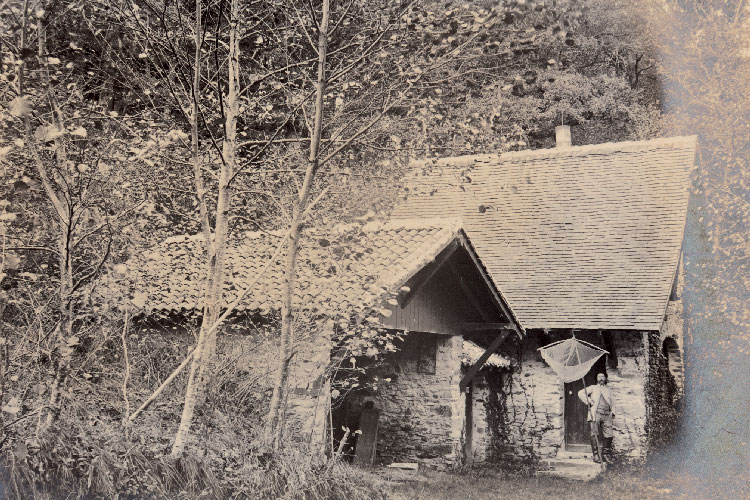 In around 1883 Albert Le Play had a lake dug and all of the necessary infrastructure for fish farming was developed around the small Le Gaby stream, which flows into the Ligoure.

Today you can still see the footbridge over Le Gaby, as well as the fish-rearing pools, the remains of a stone shelter, a trout lake and the waterfall flowing out of the spillway.

We can assume that the Maison du Garde (the Ranger’s house) was built in a neo-gothic style in 1883, along with the wall and entrance gateway.

In the 19th century, the role of the range was to “guard” the forest and oversee the strict application of forestry regulations, particularly in terms of estovers (distribution of wood for heating and construction purposes to inhabitants). A ranger would also watch out for theft of wood, compliance with hunting restrictions, poaching… He was even able to fine offenders. The ranger sent a weekly report to Albert Le Play when he was in Paris to keep him fully informed of Domaine matters.

The Ranger’s house and the pisciculture constructions are an important part of Ligoure’s heritage.

Opposite the Ranger’s house (also known as “Snow White’s House”) one can see the remains of a bridge that would have made it possible to cross the Ligoure. Today two stone piers can still be made out.

The ranger would have used the bridge to cross the Ligoure to monitor and maintain the fish-rearing pools on the other side of the river.

The Domaine de Ligoure is entirely surrounded by a perimeter stone wall that dates from the 19th century. The stone itself is gneiss and was quarried on site.

THE HISTORY OF THE FAMILY

By buying the Domaine de Ligoure in 1856, Frédéric Le Play hoped to make it his family seat.

Frédéric, who was an engineer, economist and sociologist, aimed to create a large agricultural estate where he could apply his innovative ideas in terms of agriculture and social organisation.

In 1867 he passed the estate on to his son, Albert. Albert was studying medicine, but he became involved in the running of Ligoure, guided by his father’s advice and recommendations. Aware of the poor state of the property, he made a number of changes. Firstly, he had a new castle built on the ruins of the former building and well as new outbuildings and stables. He also invested in agricultural equipment. He further developed the forested areas and in 1881 had a perimeter wall of 6km built. 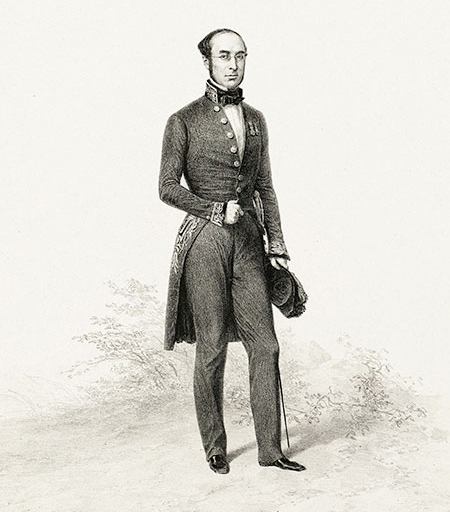 After studying at the École Polytechnique and then at the École des Mines, he became the director of the Ural Mines between 1845 and 1853.
He was the founder of a social science and published two works, "Les ouvriers européens" (European workers) and "La Réforme sociale" (Social reform).
A Counsellor of the State between 1853 and 1867 under the Second Empire, and then Senator, he was also Commissioner for the Exposition Universelle in 1855.
He founded the École de la Paix sociale (School for Social Peace) and the Social Reform journal.
He was the author behind some research that remains well-known into “European workers” (1856). He carried out a wide range of research projects for the government under Napoléon III. Today he is considered to be one of the pioneers in French sociology.
He died in Paris on 5 April 1882. 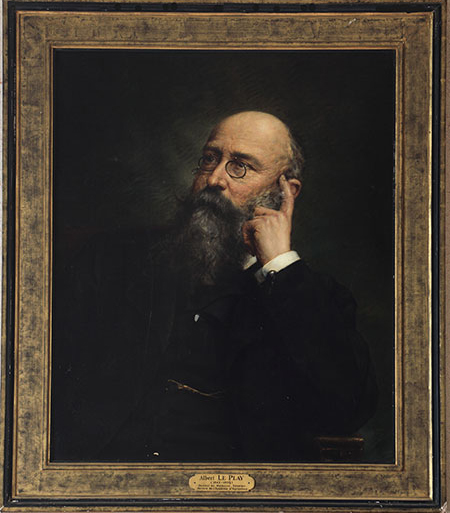 Albert was born on 27 July 1842 at Graville Sainte Honorine (Seine-Inférieure).

A Doctor of Medicine and an agriculturalist, he was responsible for organising the agricultural exhibition at Billancourt in 1867, which was part of the Exposition Universelle, for which his father was the Commissioner-General. Albert Le Play published many works on agricultural chemistry, including "La carpe, nouveau procédé d’élevage et d’aménagement des étangs" (A new process for farming carp and managing carp lakes). 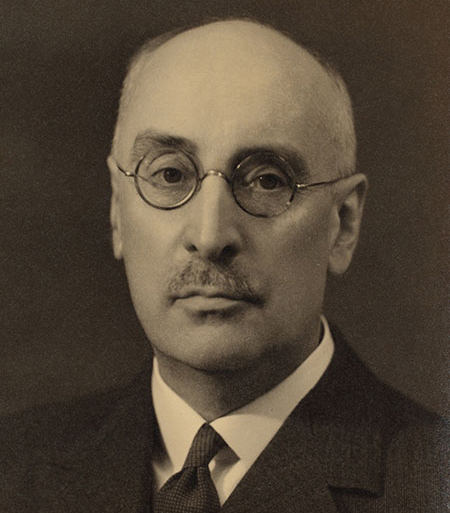 Pierre continued the work started by his father, Albert, and his grandfather, Frédéric. He enjoyed well-deserved recognition. In 1937 he was awarded the Haute-Vienne département award for distinction, which had been given to his father in 1879, a fine example of family continuity in accordance with the teachings of the illustrious grandfather.

Beatrice is Pierre Le Play’s grand-daughter and owns Ligoure. In 1997 she made a gift of the Domaine’s forests and woodlands to the Département de la Haute-Vienne.

The Conseil départemental owns the Châlucet ruins, a medieval fortress that is a listed historical monument, and the Domaine de Ligoure forest parkland.

The Châlucet-Ligoure site has been awarded Qualité Tourisme™ status, with the quality of the welcome and services it provides guaranteed by the French State.
ContactDocumentationLegal noticesConfidentiality – Personal data